Rocket Man was always a big goal of mine. Multi pitch mixed climbing in a serious alpine envieronment, what more can you ask for. This is one of many routes put up from the legendary David Thompson in the late nineties, but certainly the most impressive. The route never formed again in the past 11 Winters-until now-exactly when I am in the worst shape in recent history. I teamed up with Jeff Relph from Golden for our annual adventure outing, equally out of shape but just as motivated and eager for the line as myself. We met in Lake Louise just in time for the every day grand opening of Laggans Cafe at 6a.m., absolutely no line up's, guaranteed. After realizing at the Saskatchewan River Crossing that we have gone too far in Jeff's fancy fast Audi, we made up for the delayed start with a speedy 1.5 hour approach. 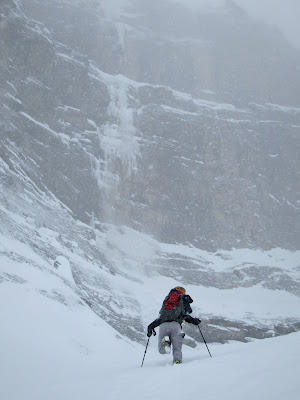 It was snowing pretty hard on the walk in and also for the rest of the day. Every few minutes we found our selfes in nasty spin drift showers and got to watch several size 2 avalanches flying over the rock face left and right of us. 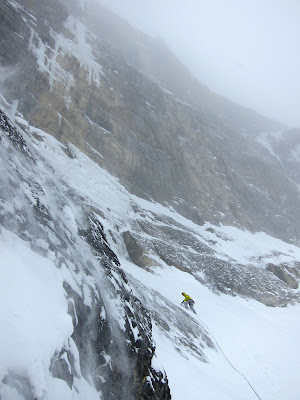 Below you see me on the start of pitch 3, which looked easier than it turned out to be. The first time I took my fruit boots out into a longer route, basically I wanted to safe weight on my back on the approach, since we used our ski touring set up. They worked surprising well, considering I never really climbed pure ice pitches on mono points before. jeff relph photo 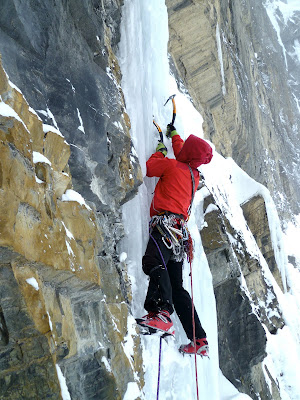 The climbing was thin, demanding, loose and a bit over our heads. The 2nd pitch had 8m of ice missing (read scary) and the third pitch (below) did not have the ever so important bolt protected pillar which gives you access to the WI 5 ice flow (read aid climbing on bolts, how gay is that). When Jeff followed the third he dropped one of his tools when a big junk of ice broke of the wall, luckily he did not get the bomb into his face. 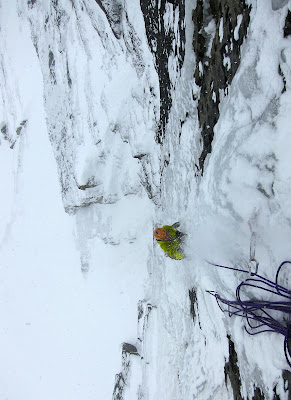 After this exitement we decided to bail, the odds seemed to be against us. Only 3 tools on such a serious route, and foremost the heavy snow fall made me worry about the descent too. It was hard to rappel at 1p.m with 7 hours of day light left, but I think it was the right decision. In the end we both have 2 kids and a lovely wife to return to. 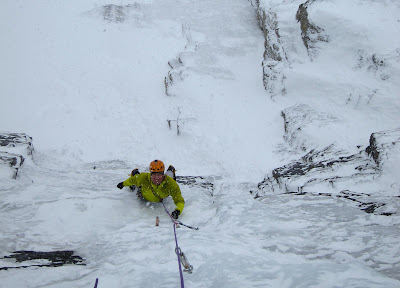 Cruising with style, Jeff's shiny Audi Quattro. What happened to the good old climbing bum generation? I certainly did not mind the heated leather seats on the way back to Laggans. After a refill and a cookie I had to step back to reality, which in my case was a cold and rattely Chevy Optra. 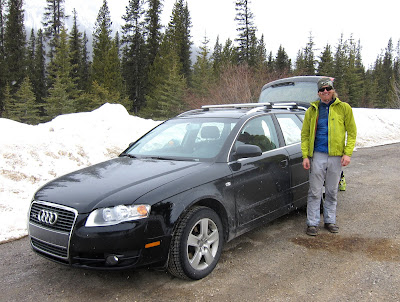 Posted by gery unterasinger at 8:57 PM No comments:

It was an odd day today. Despite excellent ski conditions the everyone but 4 of our guest decided to go back to the lodge and take it easy. This was the first time in my CMH career I experienced this and I felt bad for the 4 keen ones, who came half across the world to ski the best powder in the world. As a lead guide I an not take four skiers out in a big 212 helicopter, we would loose a lot of money doing so. On the other hand it was Wednesday and we already skied 40 000m vertical in 3.5 days, people are getting tired and a bit short on cash for extra meters I guess. 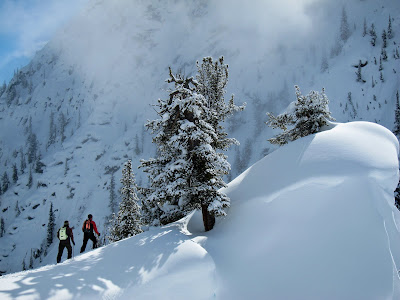 Nevertheless, most of us guides did not want to sit around the lodge in these conditions. Dellow, Yannik, Ryan and myself quickly skinned up the 900 vertical meters to the high landing of Mad Trapper and dropped in the fluffy, north facing backside aptly named Trappers Ass. What a treat to have such good ski touring available right out the front steps of the Lodge, with some sick lines without other keen competition. We were back in time for the last sun on the front deck, enjoying tea goodies and a Kokanee. 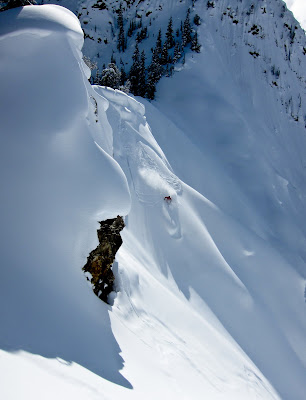 Typical when there are too many guides in the game, the first one in already triggers an avalanche. If in doubt, ride it out!
Posted by gery unterasinger at 10:05 PM 2 comments: 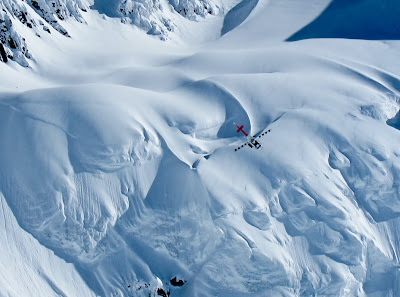 This fantastic Winter ended for me with a glorious day heli skiing in the Bobbie Burns. We skied nearly 14000 meters vertical in perfect powder from the Hatteras to Selkirks north and south and finished on Billy Goat. Every run I tried to remind myself how lucky I was to be part of a perfect Winter season and that this might be the last day of alpine face shots. Although at times a bit challenging, the ski quality was perfect through out. We did not have a single injury of note and no avalanche involvements, knock on wood. Today we had the first official spring day with all the head aches that come with it, like warm temperatures, fog layers and just simply schmuck. One more reason to remember one of the best Winter seasons I've ever had, at least snow quality wise. 2011 Rocks, or maybe I should say rocked! 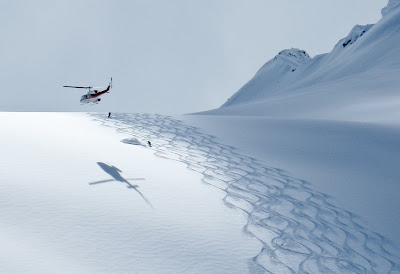 My family came up for a quick visit, one night and one short morning. It was great to catch up with them, below you see my kids under the massive roofalanche of our staff house, which slid already 3 times this season. The reeling of the deck in the far left corner is 3 meters above ground level in the Summer, just to give you an idea about the snow we've had this year. 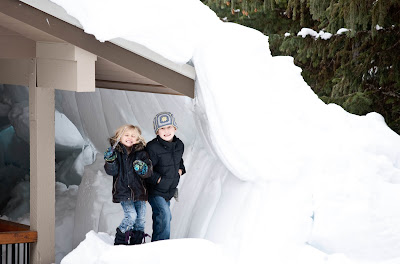 Posted by gery unterasinger at 8:15 PM No comments:

The show must go on!

It just doesn't stop snowing this year. Mid March by now and 5 days worth of fresh fluff turns every ski run into an event. Unfortunately there are always a few guests who think they have been punished by God because the weather is soooo bad, but thats their own problem. Check out this and more pictures and judge for yourself. 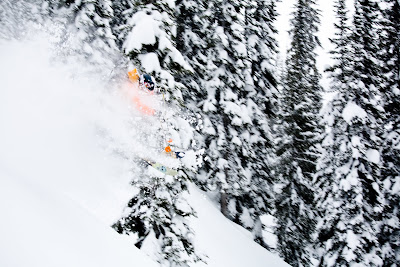 This week was the first time this winter that I took my big Canon 5D out skiing with me, and here are some of the results. "Actor" Marty Schaffer from Revelstoke came along with me for a few runs of snow safety in I tried to capture the action. I forgot how much fun it was to hunt for a good image, I should bring the beast more often. 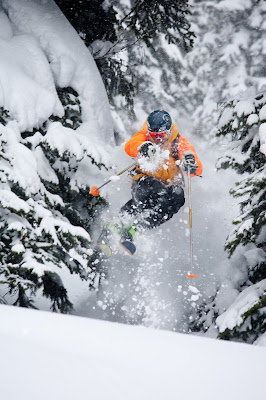 And today the sun came out for the first time this week and we made it up to the glaciers. Luckily the recent strong winds did not effect the ski quality at all and the poor folks who had to hide in the trees enduring face shots all these days got to ski what they came for. Marty and myself through 12 shots of explosives to make some safe skiing, dug out some landings, and did not have to try hard to have some fun times in between. 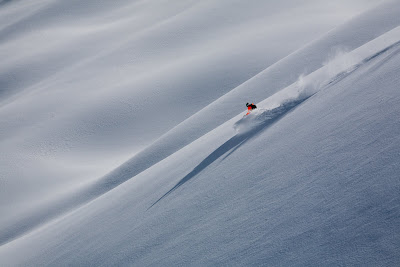 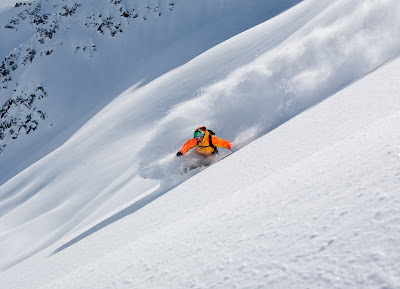 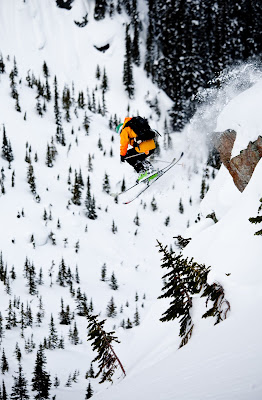 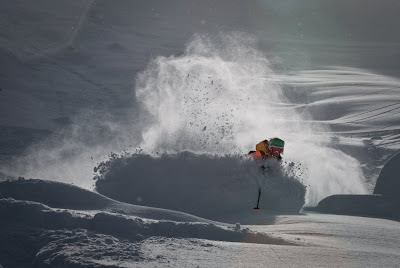 Posted by gery unterasinger at 8:01 PM No comments: 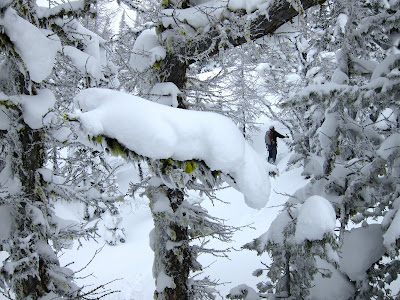 Out again today on the Face Shot Highway, this time with the ever motivated Andrew Wexler. It was dumping all day, which gave us wet clothes and some exceptional skiing top to bottom. And the walking up through this magic forest was my favorite of the day. 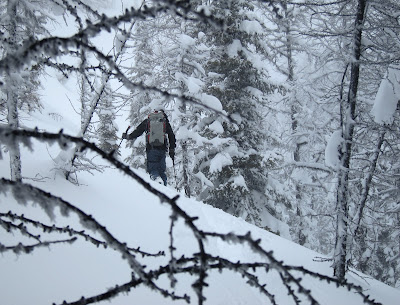 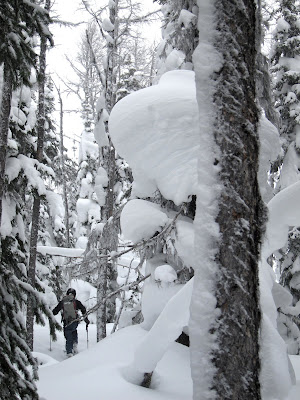 Hard to believe that this is the Rockies, and that Chick Scott's guide book doesn't have a single tour along this Highway covered. 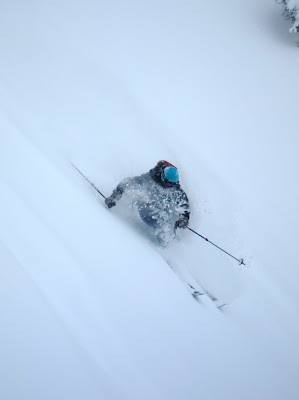 With conditions like this year we both agreed that the Radium Highway offers better, and more accessible skiing with less crowds than Rogers Pass. You can park your car almost anywhere along the highway, pick a line and go for it, no permit required. 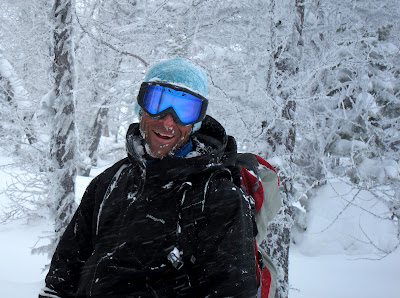 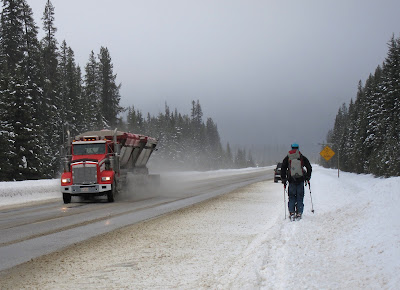 Another amazing shift and finally back home 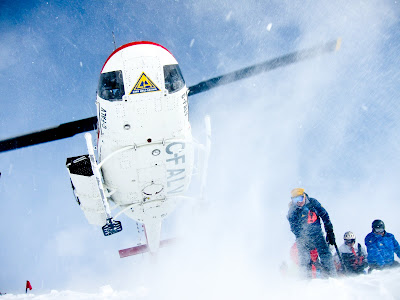 This Winter just keeps on going. Everybody just waits until it craps out, but so far there is no sign of it. If there is one thing people might complain about, it's the unseasonal cold temperatures. But cold smoke comes with a price. By the way, I actually quit smoking 18 days ago. Right in the middle of the season, cold turkey. Of course I'm still not over it and it will be a long battle, but it's my first serious attempt in over 10 years.
Below you can see the tracks on a run called Purple Heart in the amazing Selkirks. If God would have had an architect to built the perfect mountains for exiting skiing, the Bobbie Burns Selkirk terrain would have been his master piece. 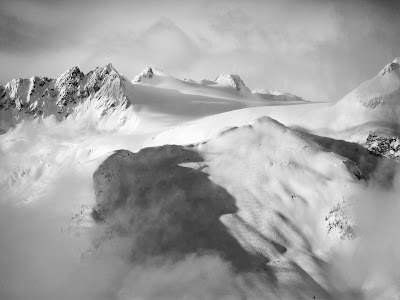 Back home for Sunday with the family and out yesterday for a quick ski tour up Mt. Whymper on Highway 93. I've always wanted to do this one but the snow coverage was never good enough to make it too appealing to me. Since 2003 the lower part of the mountain has burned and adds a lot of character. Unfortunately the majority of the route faces southeast, so after a sunny day you've got to deal with sun crust at this time of the year. It amazed me how all the cones are still attached to the burned trees, after being dead for 8 years now. 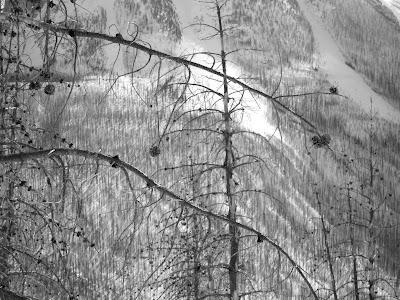 Posted by gery unterasinger at 12:42 PM No comments: