Because there is nowhere else to go? 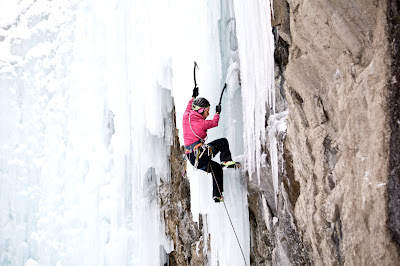 Recently we had some pretty bad avalanche conditions all over western Canada, and the roads were just a horror to drive. Naturally we had to stay away from the bigger stuff and hide either in a Pup, Haffner or Bear Spirit. It's somewhat strange that I never have the huge desire to go there, but after so many times I still have a good time playing around on those routes. It's actually a way better workout than climbing on the 'big' routes, and therefore gets you perfectly prepared for them. And on top of it you get to sleep in, which is not a bad thing since party season is amongst us. 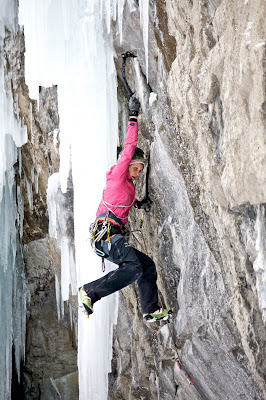 Both areas, Haffner (above) and Bear Spirit (below) are formed almost perfectly right now for mixed climbing, with nice daggers and challenging transitions from rock to ice. But now let's hope the avi hazard goes away, so we can slowly get out in the 'real' mountains again. 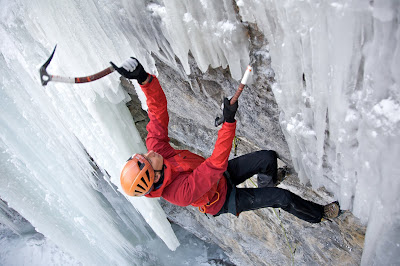 The "unwanted" point of no return-part two

Compared to part one, we had a bit of a bigger goal this time. My partner Jeff Relph and myself had never climbed Virtual Reality and we knew she's formed. Lisi and her friend Felix, both from Austria, joined us for the drive and climbed the mixed version of "but my daddy is a psycho". A brutal drive with lot's of new snow brought us to the trailhead. More snow and strong winds accompanied us for the approach, but nevertheless we started out climbing in these marginal conditions, thinking we can bail anytime. 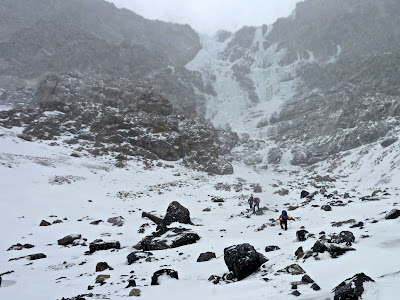 Above you can see us on the approach with the fat 'Murchinson Fall' in the center and "Virtual Reality" to his right. When we reached the base of the fragile top pillar the winds increased to hurricane force, and the gusts were almost constant. Neither Jeff or myself had a big desire to make a mandatory sideways rappel past the overhanging mushrooms below us. Our "return" was cut off by a bad anchor, off fall line rappelling in gale forced winds with the high likelihood of stuck ropes and/or getting 'shroomed'. Therefore the only way out was past this hollow pillar with bad sticks and even worse pro. Frozen wood fingers and flying ice crystals which barely allowed us to open our eyes, a lead I'm not looking forward repeating. From the top we had to crawl in paralyzing winds over to the top anchor of Murchinson, which provided a still exciting, but much safer rappel. 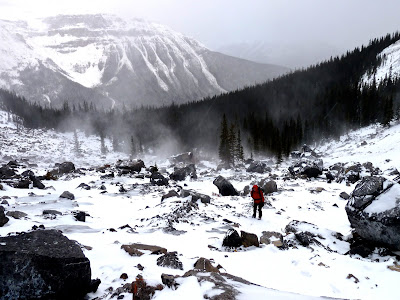 On the way out the weather did improve a bit, and for the first time we could see the mountains on the other side. The drive home turned out to be another adventure with a maximum of 50km/h.
I know that in my 18th Winter in the Canadian Rockies I still haven't seen it all, but before this me fool assumed that at least wind wise I've had the worst already. Maybe that is why after all those years we still have the urge to go out there with our sore bodies, in the hopes of experiencing the unexpected.
Posted by gery unterasinger at 9:28 AM 1 comment:

the "unwanted" point of no return-part one

Rather unintended I found myself in this classic "point of no return" situations in the last couple of days. What was supposed to be an "easy" day out on grade 4 ice turned out to be a thin lead on de-laminated styropor and 20m ground fall potential. The first picture below shows the point of return, the second shows the no return situation. I'd thought I'll get a screw in the fatter looking ice, but there was only air below a half inch layer. So the only way out of this was up, on a very thin smear of verglas. 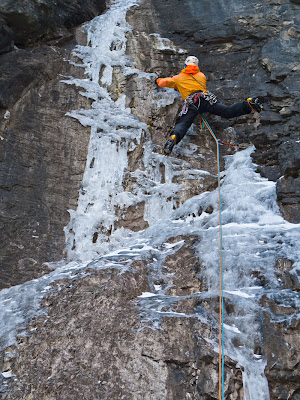 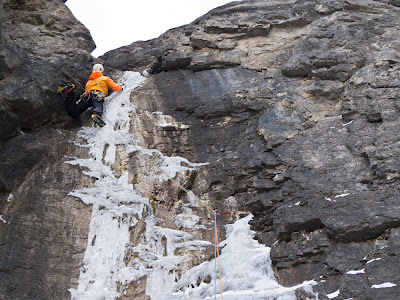 Posted by gery unterasinger at 10:31 AM No comments:

From sand to ice

A snow storm chased us home from Utah, just in time for some great early ice conditions. I find that every year it gets harder and harder to get used to the colder temperatures. This time around even more so, since we enjoyed T-Shirt days in the desert up until the beginning of November. -5 degrees Celsius seems unbearable in the fall, then in the winter it feels like a hot day. Early season ice is usually a challenge, but this fall it seemed a bit easier than usual, at least so far. Lisi and I had a very pleasant day on the Terminator about a week ago, and today I got my mandatory annual solo ascent of Bourgeau left out of the way, so now I'm ready for a few more multi pitch outings, before the ski season really kicks in. It sounds like some great early ski conditions already out west, I can't wait to get my first face shots. 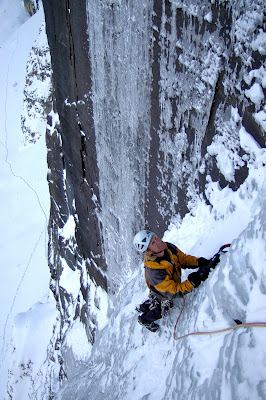 The pictures today date a few years back, since my small camera, the Canon S95 is in repair the 3rd time this year, still under warranty but now they want to charge me for the same repair they have not been able to fix to begin with. CANON sucks, don't ever buy anything from this company!
Anyways, below the legendary Joe B. well into his fourties, still cranking at the Killer Cave. 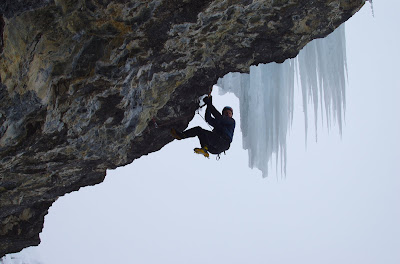 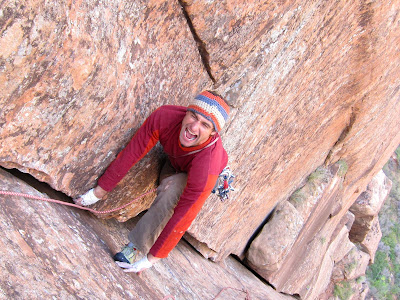 There is climbing and then there is sandstone multi pitch crack climbing. I understand that once in a while you have to step over your comfort- and pain level as a rock climber, but in crack climbing I have to do this all the time and I have not found sanity yet. Makes for exiting days though, there is never a dull moment.
A friend of mine, Lisi Steurer, finally made it over from Austria for a visit. After a couple of warm up days on Grotto Mountain we hit the road for the search of warmer temperatures and adventure, we would find it 2 days and 2000km later in Zion National Park.
Every climber we met down there told us that they have been in Indian Creek prior to Zion and that it was so much better quality. But Lisi and I were mesmerized by the shear beauty of the Canyon and the unbelievable amount of big walls surrounding it. Sure, there was some sand to be had, and the cracks might not be as "pure", but for our part we fell in love with Zion's "adventure" climbs for 11 days, and I hope I make it back down there again in the future. So much more on the wish list now, below and here a few impressions from down there. 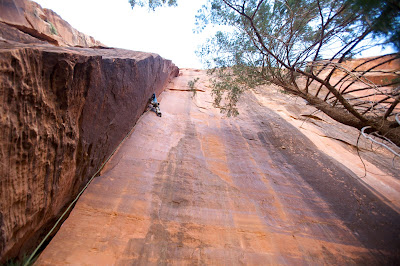 "Freak Show" was one of those climbs. You've got to negotiate some pretty crappy terrain to gain two fantastic pitches up high. (above and below) 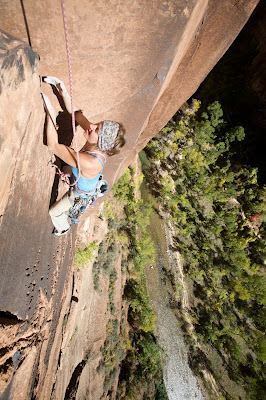 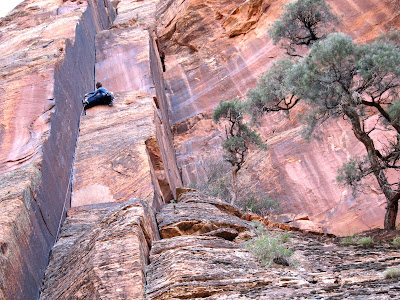 The endless layback on the 3 pitch Lab Dance, and the incredible 7th pitch of "Shunes Buttress" on Red Arch Mountain below. 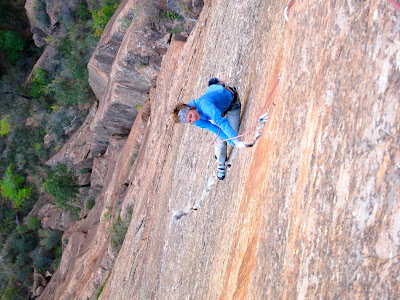