A few days ago I was still drilling new routes shirts off up at Bellavista , well above the 2000m line.
Sundays brief but intense coldfront brought a rapid cool down with snow here in town and miserable minus 10 degrees - it's time to dust off the ice gear.
Although I don't consider myself an early season ice hunter,
there are some routes you can only get at this time of the year.
For one, the approaches are still approachable, with little to no avalanche hazard,
and secondly, the thin ice has not had a chance to de-laminated yet.
Therefore, the main targets these days should be routes in a high setting with serious approaches, with no cornice build up above. Also, most of those routes have a one time chance to form and what you see in October is the fattest they get for the rest on the season, since they are not actively feeded by a water source - sort of like a hibernating bear.
So, off we went in search for one of those routes, conveniently close to town-
at least as a crow flies, but since we are not crows, it took a little longer.


Posted by gery unterasinger at 5:47 PM No comments: 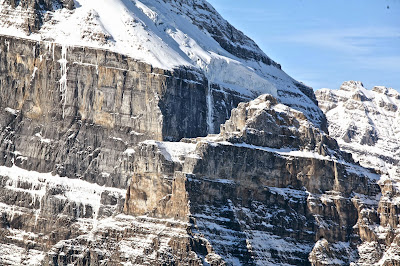 October in the Rockies, so far so good.
Seems really busy to me, although I'm not really working these days.
My Wife Kimbi is doing her shifts in the climbing gym part of the newly built Canmore Multi plex,
or better and cooler "Elevation Place"- therefore I keep myself busy driving the kids
'to and fro' various venues after school. It's funny how you can suddenly transform into a
'stay at home Papa',
after being the sole provider for the past 3 months and gone most of the time, especially the whole month of September. Trying to bond again with the kids is definitely a new challenge which I welcome and enjoy so far. Winter work is starting soon and there will be
way to long a times apart from each other.
Winter came early to the Rockies, by mid October we some of us had (or read could have had)
good ice climbing conditions in the higher alpine regions and some Ueber keeners have been skiing on the zee glazzchiers.
Above picture shows a close up of the magnificent lines in the upper part of Lefroy,
seen from Sentinel Pass. Objective Hazard? you judge for yourself. 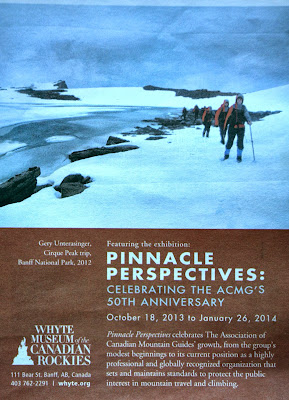 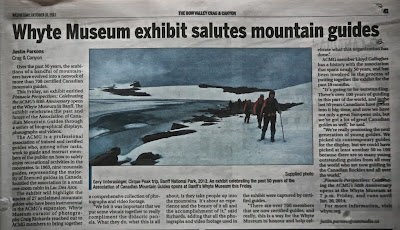 A few pictures of mine are to be seen at an exhibition in the Whyte Museum in Banff.
One of my images was chosen to be the feature image of the exhibition
and has been all over the local newspapers.
I feel very privileged to have some of my pictures presented amongst very respected photographers like
Pierre Lemire, Roger Laurilla, Greg Yavorsky and Brad White, to just name a few.

And then we had a fair bid of hiking time this fall.
Luka surprisingly really enjoyed it and he was the one pushing for it.
Bella had to tag along a couple of outings,
and although it took a bit of convincing sometimes, she has been a trooper.
It's a lot of footsteps up Sentinel Pass for a little 7 year old. 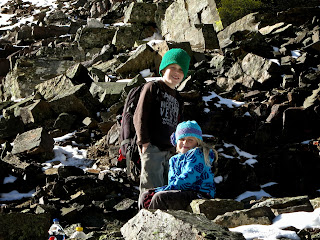 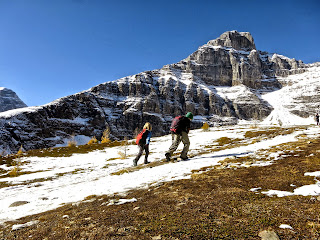 another Summer in the Alps 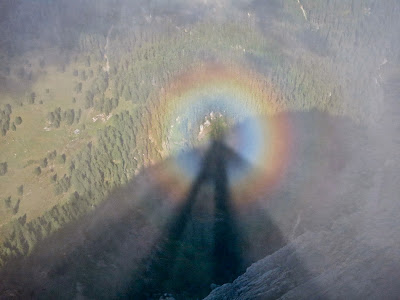 It has become a bad habit of mine not to post anything on this site during my stay in Europe.
It's not because of bad JuJu, there is simply not enough time between guiding, family and old friends
to sit in front of a computer.
And then, back in Canada, I don't know what to write anymore...
the last three and a half months feel like waking up after a gorgeous dream and only remembering some bits and pieces.
here are some of those flashbacks... 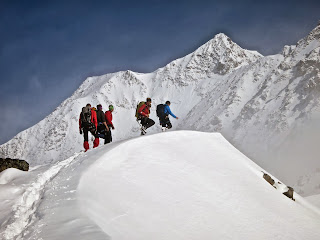 after my arrival I went almost straight to a guides exam
to the Oetztal Alps. 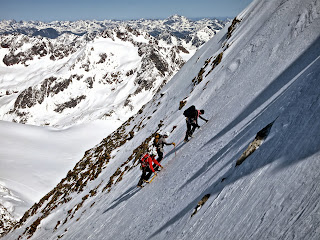 still lots of snow due to a very bad spring, but this would change soon 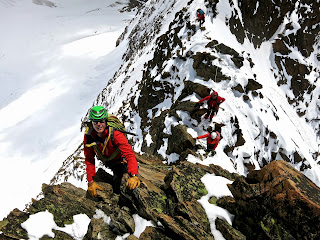 the main objectives of this exam were short roping on alpine ridges
and mixed terrain, plus classic ice faces up to 60 degrees. 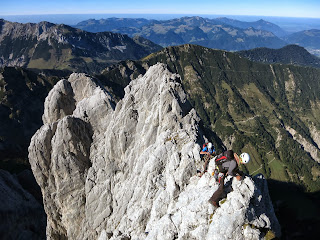 Fast forward to my last days in Europe, here at the rock exam
at the Wilder Kaiser at the end of September.
Short roping (above) and alpine rock routes (below)
were high on the agenda. 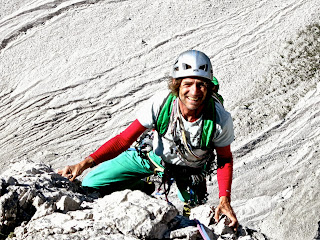 One of my best friends and most steady climbing partners,
Christian
on one of the big north faces we climbed together during
the heat of the Summer 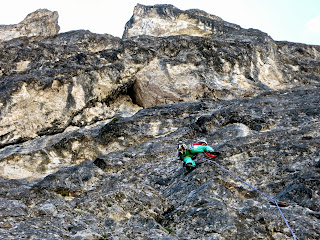 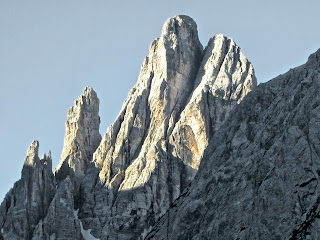 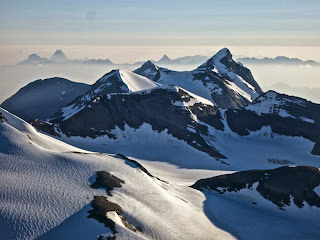 Beautiful, but crowded as usual, at least during the high season-
the area close to my hometown Lienz with the highest mountains
Austria has to offer. 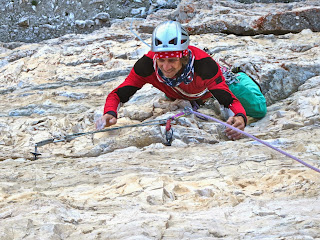 "Phantom der Zinne" at the north face of Cima Grande di Lavaredo,
another adventure with Christian 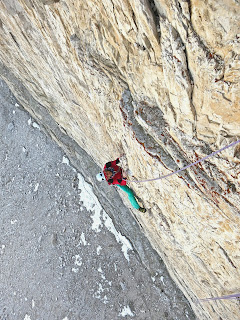 Typical run out climbing at the Tre Cime,
at least you don't hit anything in case of a fall. 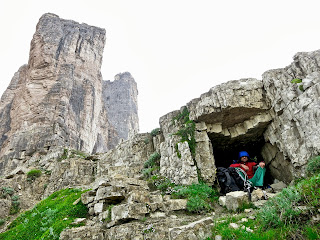 Seeking shelter in world war one caves during one of the rare
thundershowers of this Summer. 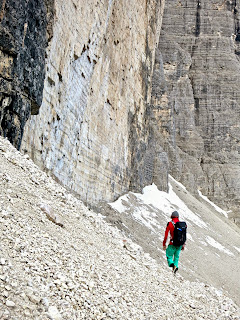