last climbing day for a while 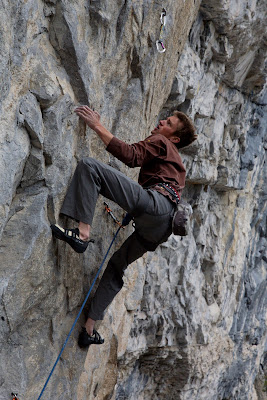 Despite the marginal forecast Todd, Derek and myself managed to get a good day of climbing in at the Lookout today. This was very important to me, since I have not been out climbing for myself for 6 days and the forecast is for loads of shit for a while. A perfect time to do some house cleaning and put on some extra weight. The picture shows Derek on a new 12b called Respected Silence, a very nice addition to the Atlantis Wall.
Posted by gery unterasinger at 1:34 PM No comments:

I finally took the time to bring Luka on his first real climb out on Rundle Ridge, right above the Banff Springs golf course. I was a little worried that it might be too much for him, but he was soo psyched about the climb as was almost vibrating all the way up. Bella got to do some top rope labs on one of the practise boulders at the base and she did really well too. We certainly have to go there more often this summer. 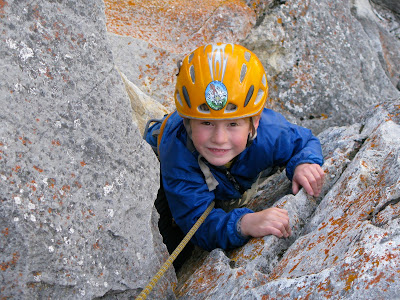 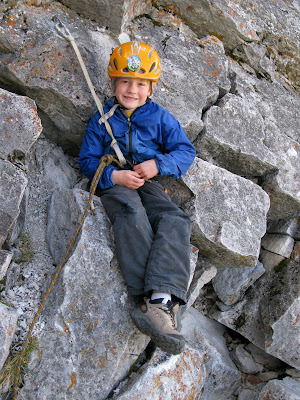 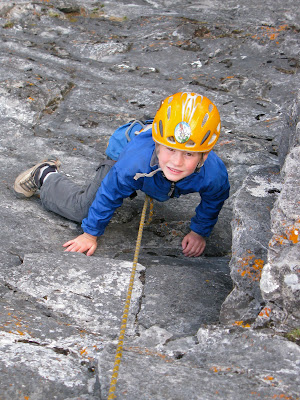 Posted by gery unterasinger at 9:41 AM No comments:

This picure of Yamnuska was taken a couple of weeks ago after our last upslope storm, thankfully it has changed a lot over the last week and we enjoyed some fine spring weather. 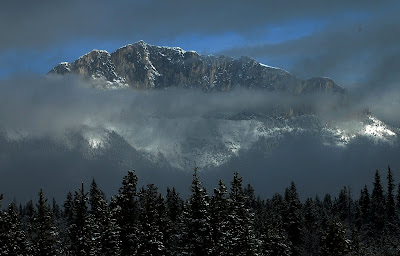 Yesterday I had my first outing on Yamnuska for the season. Derek got hooked on a project left of East End Boys and I thought I offer him some belay time. To my surprise I was getting a lot of climbing in myself, I thought it would be way harder and was expecting to jumar most of the way. The route is a pure multi pitch sport climb and was put up a couple years ago by Nick "Pump" with rappel bolting techniques. After initial checkouts by strong climbers it was rumored to be in the 5.14 range, but so far it checks in at a fairly "moderate" grade. Yesterday we freed the first 4 pitches, which go something like 5.12-, 5.12+, 5.12+ and 5.13-. It was the second time for Derek on the route and if it would not have been for a broken foothold, he would have red pointed up to this point. There is another hard pitch above that, which nobody has really touched so far. I'm sure (or hopeful) Derek will unlock the sequences through the massive overhang fairly quick, which should open the door for a continues red point attempt on one of Yam's hardest rigs. I also selfishly hope that the unknown pitch is no harder than 13-, so I can have a go at this appealing line in the future. Thanks to Nick for all the hard work he put into this route, it takes a lot of will power and vision.
Posted by gery unterasinger at 11:10 AM No comments:

After all the great sounding reports of awesome ski descents I got psyched on doing a "last" ski tour of the season on the intimidating NE face of Mt. Victoria. Andrew Wexler picked me up at 2 in the morning at my place, and we started walking around the Lake at 3:15. It was warm at the parking lot, way too warm and no overnight freeze. We were able to walk in our runners to about 100m below the Plain of the six glaciers. Isothermal snow made us turn around at around 2300m, a rain shower helped to make up our troubled minds, and we headed out in terrible travel conditions. We managed to finish the day with an afternoon session at Grassi, which was a good substitute for the unsuccessful morning outing. 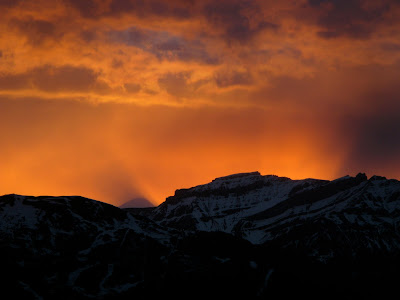 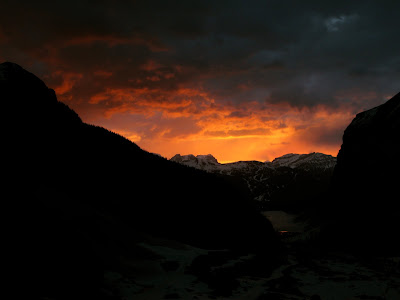 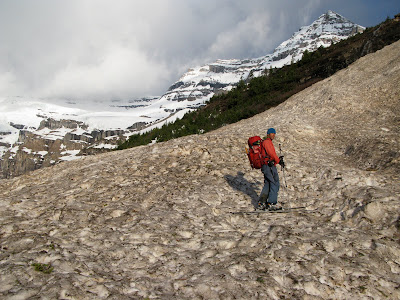 a little hang at the Plain of 6 hut and an example of the suburb spring skiing. 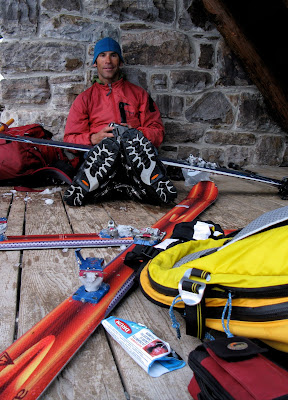 Posted by gery unterasinger at 9:30 PM No comments:

the new moon is over 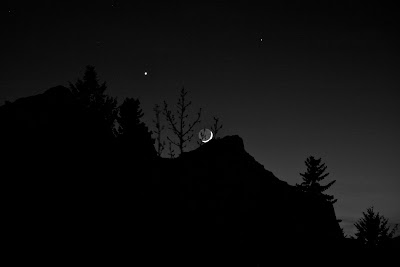 This is a rare opportunity, actually not so rare since it happens every 28.5 days if you have clear skies. The first signs of a growing moon towards the western evening sky can be somewhat more inspiring than a full moon. Sort of like less is more, or a beautiful naked lady hiding her best parts under a tiny Bikini.
Posted by gery unterasinger at 4:17 PM No comments: 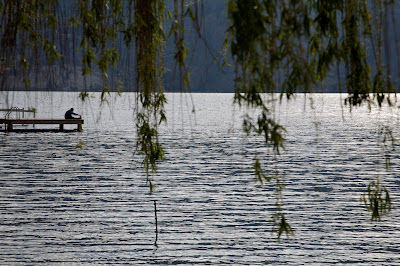 I finally made it to Skaha/Penticton and was able to escape the bad weather in the Bow Valley. Almost 3 weeks of continues cold temperatures and significant snowfall way below treeline was enough for me to make a move. It was the first time in 8 years that I climbed there without the kids, which actually felt quite strange. Probably half of the climbing population of Alberta was there too and the campground got very busy over the weekend. Banbury Green is such a nice set up, right by Skaha Lake but very quiet, despite it's close proximity to the highway and Penticton. Although officially closed, the owners let you camp there for 7$ a night, which is a bargain in my opinion and should not be abused by opportunists. 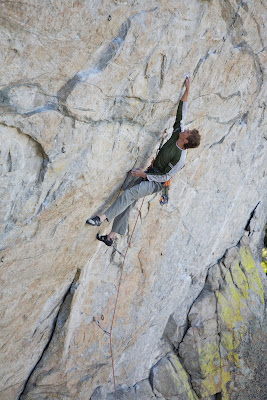 Derek Galloway joined me for the trip and although he did not climb for 7 months (his personal record), he started the season with a 12d, 13a and a 13b (all 2nd go!) and the impressive Pressure Test, a 35m 13c. 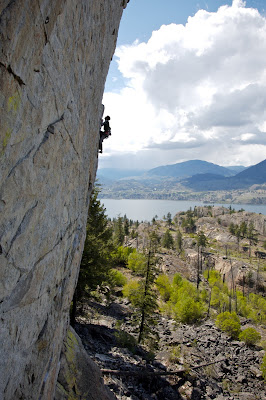 Pressure Test is an all natural route through the most intimidating face of Skaha, in between Air Test and Breakfast of the Champions, which are both enduro routes in the 13a range, 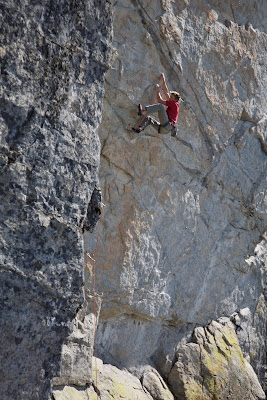 Jay Audernat hooked up with us for the weekend too, it's been exactly a year that I saw him last. During this time he has not lost his passion for hard climbing and he was cranking as usual. For all the girls watching this blog and set and eye on him, dream on, he is taken! 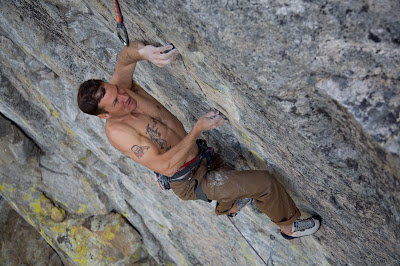 Here you can see great looking Jay on a great looking route just left of the classic Wings of Desire, a 13a/b named Power Toy-maybe a reference to his heavily tattooed body from his wild teenage years. 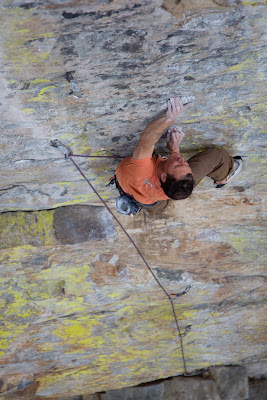 My usual early season shape (aka no endurance and no finger strenght) did not allow me to follow in their footsteps, but I found plenty of easier lines close by to keep me entertained. Just hanging out with those guys and realizing what's possible if one's motivated... that is very inspirational. Now I'm back in Canmore, the weather is good again and I still have some time off. Hopefully I can take advantage of this break and get myself in decent shape for things to come.
Posted by gery unterasinger at 11:51 AM No comments: 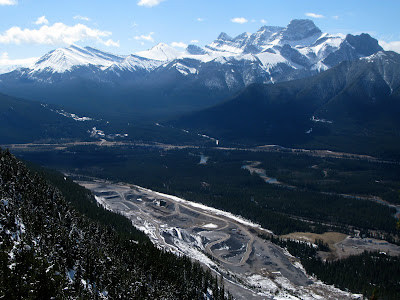 Hiked up to Bataan today, at the first cave I encountered a foot of wet snow on the trail, had a Drum and took this shot before heading home again. From view points like that, the ugly mine scar just east of Canmore seems to have more impact to our stunning landscape than from town. This one is going to be hard to hide from our future generation, I wonder what they will think about us?
Posted by gery unterasinger at 9:42 PM No comments:

A day in Sunshine 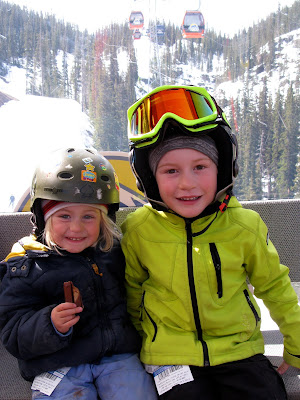 Bella, Luka and myself had a splendid day in Sunshine Village, a ski area 40 min drive from Canmore. It was the first time for Bella skiing there, except when she was a baby and I ski toured up hauling her on the back carrier. She did really well for a 3 and 3 quarter year old and we skied the Continental Devide lift 3 times. Luka was the usual good brother leading ahead but waiting for us snow plowers all the time. We were actually able to do the skiout all the way to the car, which I thought was quite remarkable considering it was May 1st and one of the leanest and warmest Winters in recorded history.
Posted by gery unterasinger at 9:46 PM No comments: