Everyone, including myself, talked and dreamed about it lately, but in the end Chris took advantage of the great conditions this year and did it. Skiing the North face of Mt. Bryce is an impressive achievement, considering the remoteness of the peak and the style he choose to do it.
Gratulation!
A few days prior to his adventure I took these pictures from the Columbia Icefield.


So what is the last problem left to ski in the Rockies now???

This Mountain deserves a name

The map doesn't say anything other than 3155m, which is btw. 4m higher than the famous Aberdeen across the valley. Most guides, including a guides book, calls this formation simply "Unnamend Peak". This seems to work for everyone involved here, but after climbing it last Friday, I feel it is a peak worthwhile a real name. I know it sounds a bit out of whack, but what about "Lady Diana". Any other suggestions are greatly appreciated, but it's gotta be somewhat British like the rest of this neck of the woods. I'll submit an official request for the winner.

A trip to the highest point in Alberta

After some pretty bad weather the first few days of May, the clouds lifted just in time for us to climb one of the big prices in the Rockies on skies. It is a long walk on snow and ice indeed, and after 2 long days covering a distance of about 20km we reached the summit of Mt. Columbia on May 7th, just in time before the clouds rolled in again. A big and remote mountain in a grand setting!

Southfacing cliffs like Bataan and Echo Canyon on Grotto Mountain, seen below from the way up to Little-Middle Sister col... these shear endless bands of rock walls are partially responsible for my lonely playtime on skis lately. Amongst my slow healing ankle and rather challenging snow conditions with, at times little overnight freeze, most partners are, very understandable, already in the rock climbing mood and entertain themselves with wicked early season pumps predominantly over on the other side. Since April is now officially history, it is now May's responsibility to provide us with a higher Pressure (air that is) than the former month. 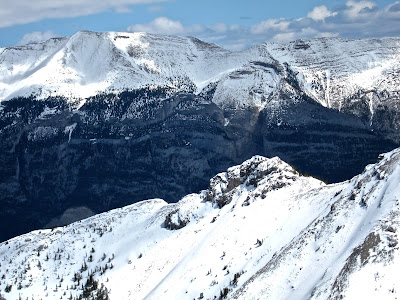 Almost looks like Summer, but this was taken from one of the better ski outings I had this spring. One of the rare opportunities we have in Canmore, skiing touring and being able to look at my house the whole time. The rock face you can see is the south (hidden) side of Canmore's landmark Little Sister. Looking at all the green down there, it's hard to imagine that it was possible to ski all the way to the car parked at Three Sisters Golf Course, where I had to fight my way through a big herd of Elk. 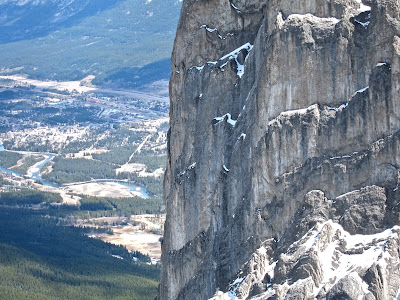 The mighty Middle Sister with a nice sluff roaring down the East Face. 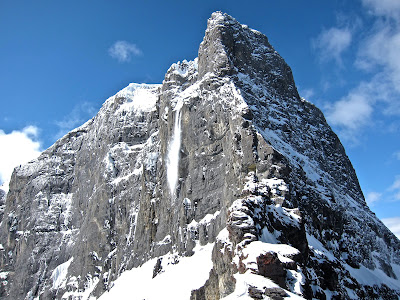 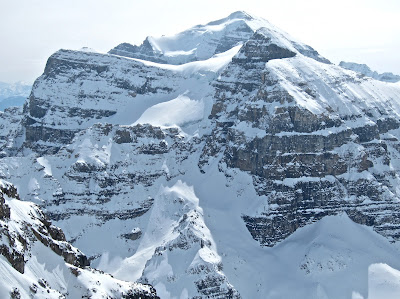 On a different outing 10 days and a terrible warm spell later, this time around Lake Louise. I've spotted the line (in the center of the picture above) already years ago but I had a hard time convincing partners to give it a go. Leading to a dominant peak like this it must have been done tons before, but it felt pretty special to have the necessary 99.9% safe conditions to do it alone.

Out of the 1450m of ascent the skies stayed on the pack 90% of the time, while on the way down they were on my feet 100%...should have brought some ski crampons to even it out a bit.

When you travel alone, nobody can make fun of your head gear.
Looking towards Sentinel Pass and the not so Grand Sentinel below and right, from here it actually looks like there are two Pinnacles. 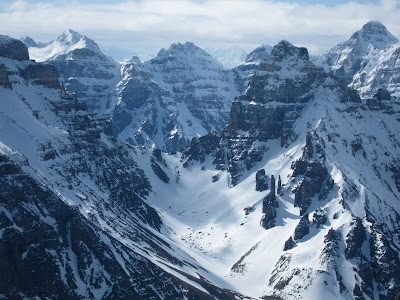