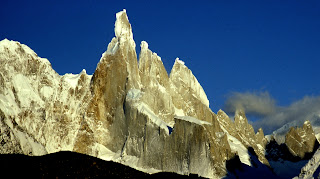 I don't even know where to start, things are going off down south. One news flash after the next, that's what you get when you have a lot of strong climbers ready to strike assembled in Chalten and the weather is good.
First and foremost, Canmore's climbing community is in grief over Carlyle's tragic death on Exupery. I did not have the pleasure to know her personally, but those who did had only good things to say about her as a positive and inspiring person.
Amongst a lot of first ascents and fast repeats, in my opinion the highlight so far this season was the first ascent of the south face of Torre Egger. Make sure you check out the pictures on the link, what an amazing new route, and the style the two Norwegian's climbed! It just shows that there are so many more cool lines to do in Patagonia, besides getting hung up on the ethics of a route which has been done 42 years ago - which brings me to the next, rather complicated issue. Below a picture of mine from 1994 shows the 'controversial' top 500m of Cerro Torres SE ridge, taken from the summit of El Mocho. 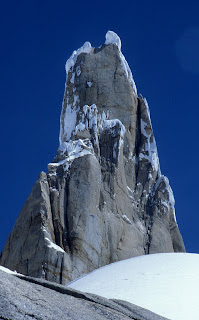 Hayden and Jason made a fast ascent (or what they call 'by fair mean's' ascent of the SE ridge avoiding most of Maestri's line and bolts. On the way down they rappelled Maestris Kompressorroute and chopped most of the bolts in the upper part. Here is their official statement about the route they climbed and their chopping actions. It came to no surprise that this was the start of a lot of heated discussions and it seems to split the caring part of the climbing world apart.
A few days later the young Austrian David Lama (with partner Peter Ortner from my Austrian hometown) made a very impressive and ground breaking first red point ascent of the SE ridge, also with major variations to the 1970 line, and therefore also avoiding the majority of Maestri's bolts.
Of course everyone is entitled to his own opinion, now you can actually even vote on the issue - not that it will change anything though. Me personally I was always against erasing the Compressorroute, but I wanted to wait until the official statement of Hayden and Jason, because I highly respect them as climbers with great style and vision. After reading it I still hold on to my believes though. Every climber should have the right to make a first ascent in a style he chooses, of course in compliance with the local ethics, if such even exist. If other climbers don't agree with the style, they can stay away from the route or climb it in a different style. But never even climbing the route and then chopping it on the way down, during other climbers climbing up on it, seems a bit out there to me. Hayden and Jason climbed a major variation of Maestri's route in order to avoid the use of his bolts. They also used other bolts and placed their own last year, they made a pendulum traverse and aided on hooks, fine. David Lama also climbed a major Variation and free climbed everything, most of it on sight and the crux 13b pitch 2nd go, also good. And Joe Blow climber tries to full fill his dream and make the 400th repeat of the Compressor route, that should be fine too.
Posted by gery unterasinger at 1:38 PM 2 comments:

The kids are back to school after 16 days of a very nice Christmas break. Between a lot of visits from family and friends we went skiing to Norquay 7 times and played a lot of hockey. Nevertheless, this kind of exercise, combined with the usual oral pleasures of Christmas, did not help transforming me into a stronger climber.
Yesterday I got the bill presented under the unforgiving overhangs of the 'Hoar cave' in Haffner Creek. Ever since Isaac Newton invented the gravity, the extra pounds on my belly seem to increase the pull from the ground.
At least I got to watch and belay a more disciplined Raphael S. cruising all the lines as if the gravity switch was turned off during his multiple laps.
I'm definitely a bit unsure about the vision of this kind of sport - bolted rock climbing with ice tools and crampons and no ice - but it sure makes for a burly work out...
better than surfing with a surfboard without water, that's for sure. 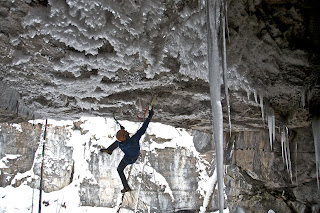 Above and below- Raph on the classic Cave Man; once the hardest 'mixed" route in the world, now the scene of several burns in a row for the horizontally gifted. 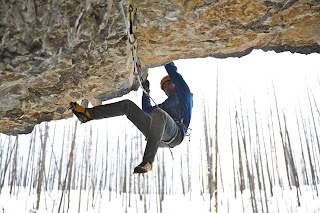 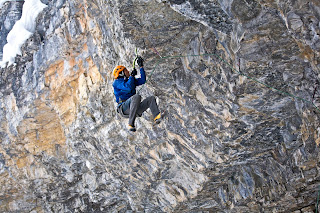 Above is Raph catching the swing on 'Fire Roasted'. 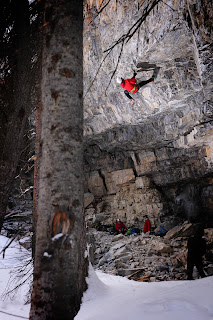 The picture above is me on the crux of 'Fire Roasted', taken by a professional photographer named Wictor Skupinski. He dragged a big external flash light with a huge battery in there to lighten up the dark cave. He puts a lot of effort into his shots and it certainly shows. I particularly like the wide angle approach in the majority of his climbing work I've seen so far. You can see him below on his way to the cave with the flash light strapped outside a pack full of camera equipment. 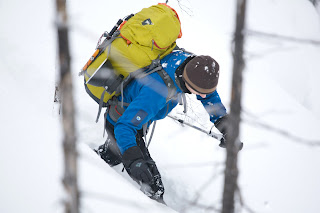 Posted by gery unterasinger at 10:36 AM 3 comments:

On Dec. 29th I finally managed to get to play a bit again with Raph. We did have a different goal in mind, but due to high avi hazard everywhere we decided to go to Kicking Horse Canyon, close to Golden/BC, to try a route neither of us had done so far. The "Cookoo's nest" is a pretty mixed line through steep cliffs on natural protection. It all sounds good, if it wasn't for the location: a stone throw away from the Trans Canada High- and Railway, in the narrowest part of the Canyon. The warm and moist conditions created a west coast feeling with the smell of wet cedar trees and made us feel a bit out of place with all of our ice gear. After a long drive we were not about to turn around though, and we managed not to drown climbing through the multiple showers. Whoever was the bright and good soul to invent the hoody, a big thanks. And to all of the rest a fun and safe 2012. 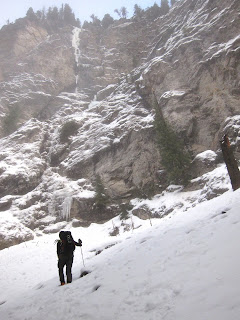 Above, Raph approaching the route in the 'Schmack' and below, after 100m of unroped, low angled mixed terrain, leading the first pitch through the first shower. 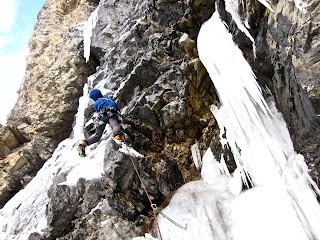 This was probably the crux of the route, a short but steep cave to a detached dagger with ledge fall potential. Me following the short pitch on less than aestethic ground. 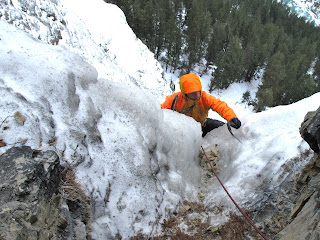 On the next pitch I actually experienced my first lead fall on natural pro wearing ice gear (a few meters after the below picture was taken). After fumbling around way too long with a sling in a natural threat, I finally placed a perfect nut in it. Annoyed at myself that it took so long to figure it out, I tried to make up time with not paying attention to my dry tooling placements. A thin layer of wet ice gave away under my front points, and I was airborne in fairly easy terrain. Although I got away with a bruised shoulder and ego, I was mad at myself for this unnecessary but well deserved fall. 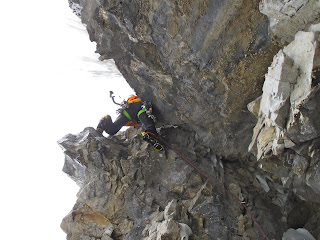 After finishing my lead I had to go out left to make a rock anchor under another shower, since the ice was too soft for great screws. Raph finished of the route on improving ice, actually the most fun part of the day. All in all a great route, not too hard, good pro and interesting climbing. Bring your Ipod to escape the noise and wait for a coolder day. 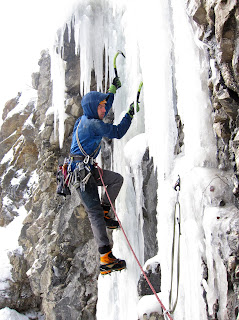