A few days back we had a very close call at my work place, the Bobbie Burns. One of our guests got cought in a class 2 avalanche, and ended up buried 3 meters under the surface. Although there is very little chance of survival with such a burial depth, we managed to dig him out in approx. 10 minutes. By the time I reached his head he was unconcious at not breathing. By the time we cleared his chest he started to breathe on his own and regained his conciousness shortly after. Needless to say that we were all very happy about his survival, but also pretty shaken up by the incident. Dispite all the efforts of keeping everybody safe in such a terrible Winter, we got schooled by nature once again. Play safe everybody and celebrate life!
Posted by gery unterasinger at 1:59 PM No comments:

Ever since I saw this climb the first time 15 years ago, I've wanted to climb it, but I had to wait for it to happen until yesterday. Although I don't want to look for any excuses, there where several reasons that prevented me from climbing it earlier. Bad conditions of the climb and/or myself, too much avi hazard or hideous trail breaking on the approach, lack of like minded partners or just simply a busy life with a full time winter job and a great family I want to spend time with.
Luckily I found someone who sits in the same boat and was keen for the route as well. Jeff Relph moved to Golden a couple of years back to raise his young family in a nice home, which was hard to achieve during Canmore's peak of the boom then. After his move we grew out of touch for a while, but due to a matching CMH work schedule we were able to hook up again for this common goal. Although far away from a solid ice climbing shape with little milage under our heli bellies, we were hoping that expierience and drive will make up for our lack of power and endurance. 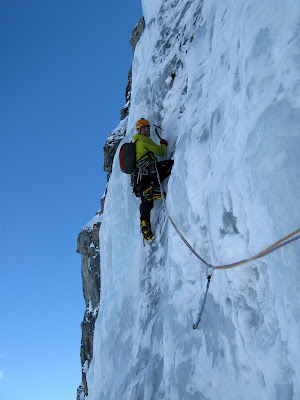 Jeff leading out on the spicy 3rd pitch 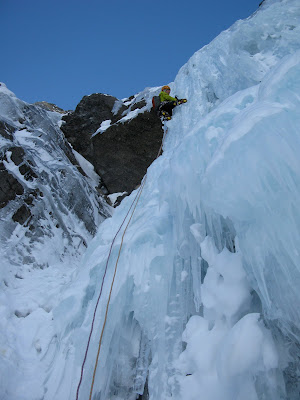 wake up call on the first pitch with cold and brittle ice and fingers. 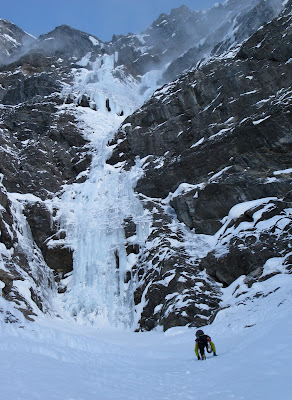 I've climbed much steeper ice for sure, but usually with better quality. If you would rate the climb by steepness, by definition it would maybe get a WI5, but there is something about the ice quality which is probably best described as fearful weirdness. 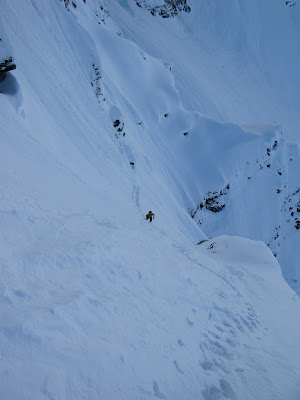 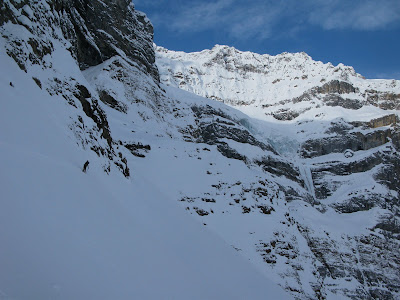 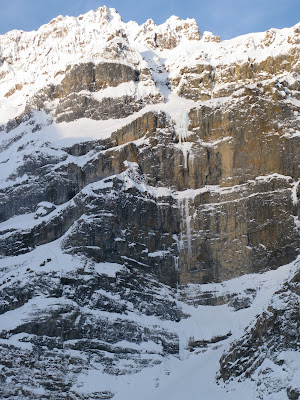 The impressive "Rocket Man" opposite of Riptide, another climb high on my hit list, if it ever "forms" again! With it's nine pitches of ice and mixed climbing the longest and perhaps most involved route of this kind in Canada.
Posted by gery unterasinger at 6:58 PM No comments: