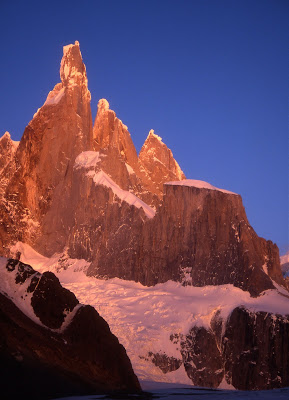 There is something I have to get of my chest right now. For those who followed the recent controversy about the Red Bull film project on Cerro Torre with David Lama, I would like to bring some of my thoughts forward. First off, in most articles and responses there are again a lot of bad words used about the first ascent of the compressor route by Cesare Maestri. Although everybody is entitled to his own opinion, I find it really sad that there are so many people out there who have never even been in Patagonia commenting bad on Maestri and his route. I have been there, I was fortunate to climb the route in 1992, and I climbed a lot of routes Maestri put up in the Dolomites and the ones he did the first free solo ascents. Maestri was one of the leading climbers in the 50ties and 60ties in Europe and was mostly known for his bolt free solos of big limestone walls in the Dolomites up to stiff 5.9. He also made it a habit to down climb every route he soloed up, which is, even in today's standards very impressive. Maestri was also one of the first climbers who viewed climbing as his profession, and therefore had to self promote his ascents. Most other famous climbers in that period made their living as mountain guides or hut keepers. Due to this fact he was always perceived as a controversial person within the climbing community. In the case of Cerro Torre, he found an unusual sponsor, who financed the at those days very expensive expedition. Atlas Copco, who built the infamous "Compressor", was willing to pay the big bugs if Maestri would actually bring the 400 pond monster up the wall and actually use it too. And did he ever use that thing, and parts of it are still up there just 50m shy of the summit, a testimony of human will power and the ability to suffer.The Compressor route on Cerro Torre is still one of the best alpine routes I have done, despite the controversial style, and I have out most respect for Maestri's tour the force. Nowadays the style is easy to criticize, but in the late 60ties and early seventies it was almost normal in Europe to put up routes in that style in the Diretissima area. We all know know that it was a dead end road, and luckily the climbing community learned form it's mistakes in the past. Please respect the fact that climbing was evolving over the decades and still is, what we consider as kosher these days might get criticized or even laughed at 30 years down the road.
Not only in Europe we went through this "darker age" of climbing, North America is full of bad examples too and we should take a close look at our own climbing history before we down talk an era which had it's time and place in climbing history. So please stop badmouthing Maestri and his achievements, he was always one of my climbing heroes. 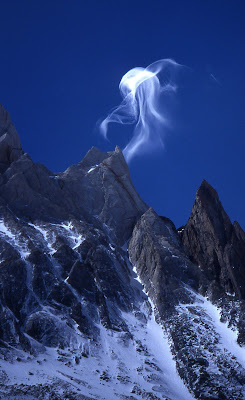 Now back to the Red Bull topic. I really don't understand the huge fuzz a lot of people make lately because of a few bolts. Those are not the first bolts added to the route, in 1994 a German team of strong climbers (Robert Jasper and Joern Heller) bolted a rappel route down from the shoulder to make the descent safer. There were at least 2 fatalities I know of in this section due to failed anchors, and I almost died there too. Luckily I hit a ledge after a 25m fall and got away with a broken pelvis. The above mentioned rappel route got widely excepted by climbers and got used regularly on the way down and nobody raised a big stink about it. Due to glacial melt back this rappel route got harder to use over the years and the mountain guides from red bull reestablished a new, safer line.
This is not the first route which got altered after it's original ascent. Although there are many bolts already on the route, these are only 6mm bolts and just hammered in a 6mm hole with no expansion device. Considering this and their 40 years of age, you can imagine their holding power. Big parts of the line Maestri choose don't follow a natural line, so in order to free climb it one must choose variations away from the blank granite. These variations might require additional bolts in order to free climb them safely. Although Lama did not apply this action yet, I would support it. Even ultra classics like the Nose on El Capitan had bolts drilled for the first free ascent, and nobody dared at the time to give Lynn Hill a hard time about it. There is hardly a classic route in the Bow Valley anymore where there are no bolted anchors. Other routes like Kahl Wall, where the previously run out crux pitch was turned into a sport pitch with multiple bolts, mutated to one of the most popular routes on the wall. The NE face of Ha Ling has every anchor bolted and there are at least 5 protection bolts in 5.6 terrain, and nobody seems to care. There are many routes in the Valley who got established top down with a Hilti and it seems to become a widely accepted practise, at least Maestri bolted ground up.
Don't take me wrong here, I am not intending to criticize any of those actions, all I'm trying to say that we should not preach water and drink wine. 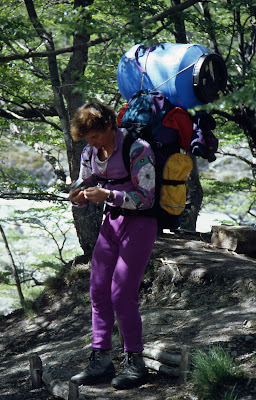 To lighten things up, this is my climbing partner Hannes Wallensteiner in 1992 demonstrating the at that time way more colorful outfit. It's amazing what climbers got away with those days. In 92 Hannes summited Cerro Torre already twice, the only person at that time besides Ermanno Salvaterra, the patagonian legend. That year Hannes and myself also made the first reported 1 day ascent of the Compressor Route, with strategic help from Ermanno.
Posted by gery unterasinger at 10:57 AM