Winter is in full swing 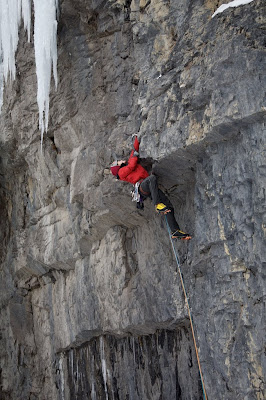 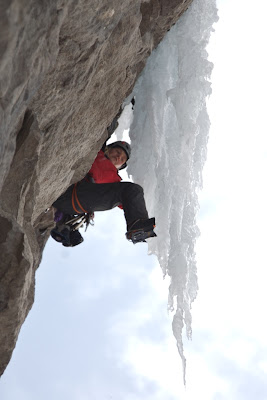 Well, it's been a while since my last post. Rock climbing took a sudden end beginning of October with a -25 cold snap for a week. After that it never really warmed up again to do anything enjoyable on the cliffs, so I went mainly working at the lodge and spend 4 days drilling a sick new 50 meter line at the Lookout. To the mid anchor at 25m she's about 5.12, and then who knows. I called the line "Supersize it" in relation to it's fabulous neighbor to the right, "Buffet Royale".
In November I had a few ice and mixed outings, but was always struggling for partners, and the conditions were not always that good (warm temps, avalanche hazard and not too many choices close by). For some strange reason I was in good shape and wanted to take advantage of it. I started the season like last year on Nemesis, this time with Simon. After we rapelled we quickly nailed Thriller to round up the day. Another casual day with Marc and Lila on the Chalice and the Blade and an exiting day with John on the Trophy Wall without much climbing, and that was it for the ice. On the Mixed side I got a couple days in at Haffner with J.D., with a quick ascent of Fire roasted (M10/+), which made me pretty happy. My last outing was with Jen and Lila to the unformed Oh le Tabernac. We climbed the bolted mixed start on the right called Mercy Buckets (picture above), which was actually a lot of fun and maybe M7. After being hosed for a few times by bailing partners I got sick of the game and decided to concentrate on some ski touring, since we had a pretty epic start of the winter. 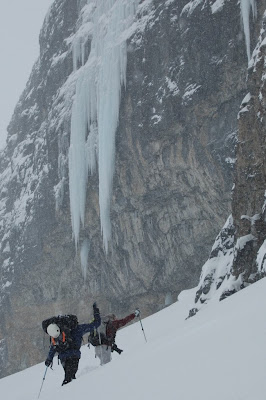 left you can see us approaching the Killer Cave in wintery conditions
Posted by gery unterasinger at 1:45 PM 1 comment: