A 10 year old boy from Canmore doesn't get out much anymore with his father,
since his dad was gone most of the Winter working. The rare times papa was home son had to go to school. Today Easter Holidays started, Papa is finally at home for the entire 10 days.
First off, son wants to go ski the cool looking line right above town, the one he can see so well from his bed room window. 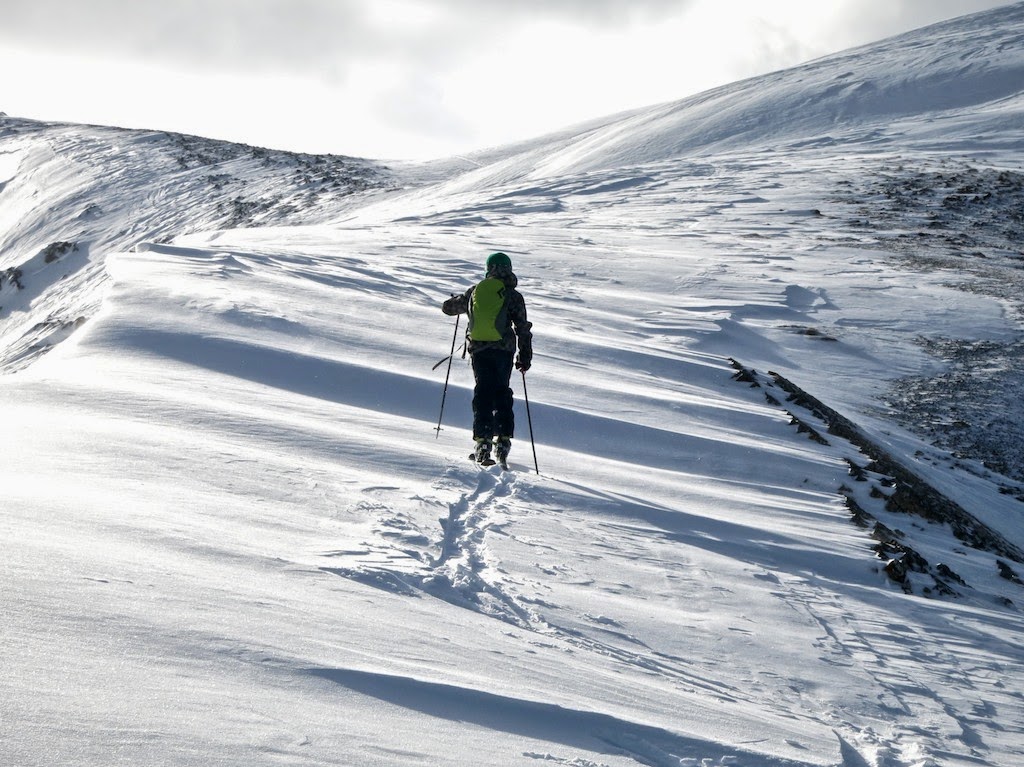 So off they went, a cool line requires an early start, earlier than any school ever starts. 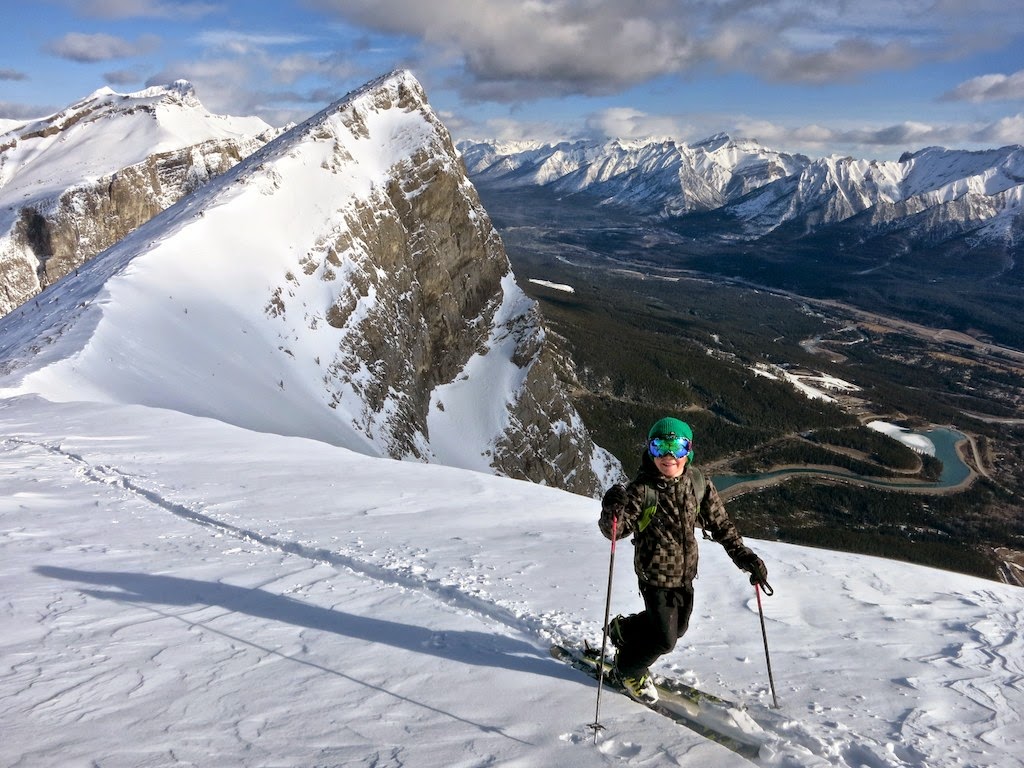 Finally, after 2 hours of steady climbing, the top is near and the town with all the schools and rules far beyond. 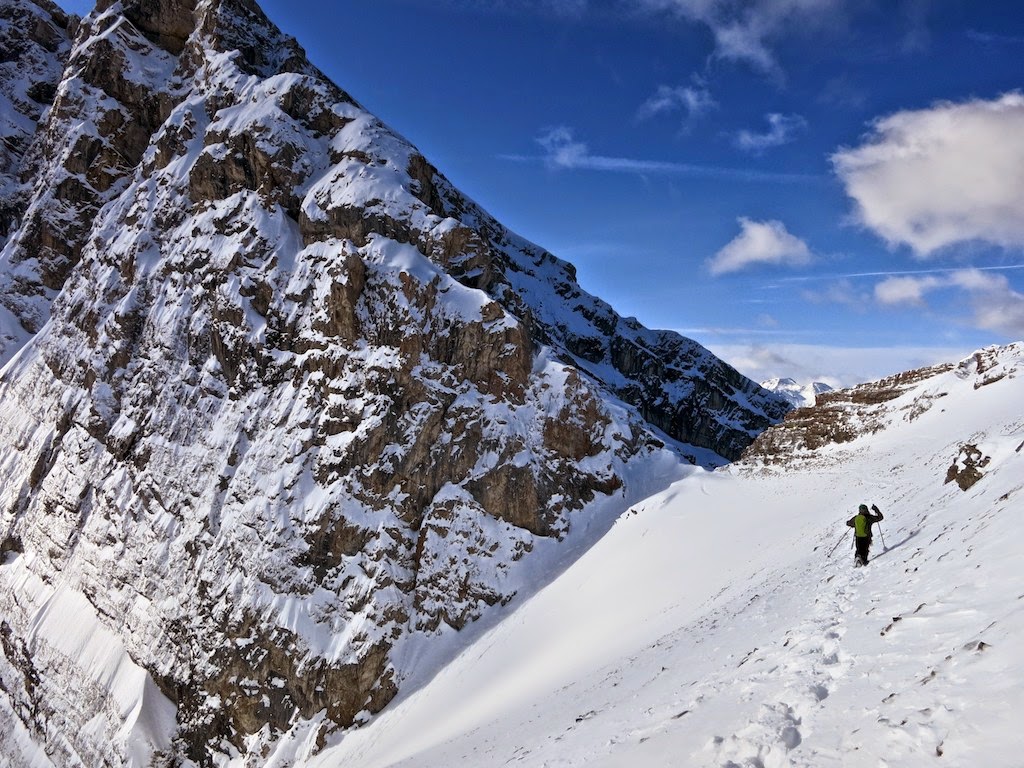 With the line in sight new energy is gained, and son wants to boot pack ahead. 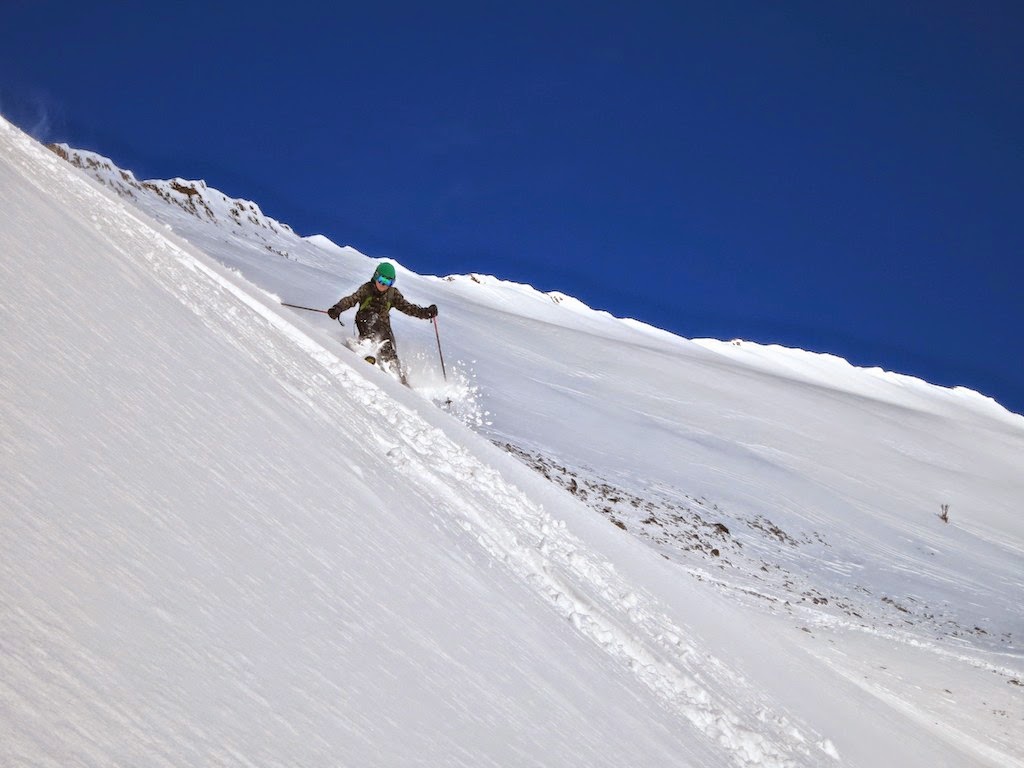 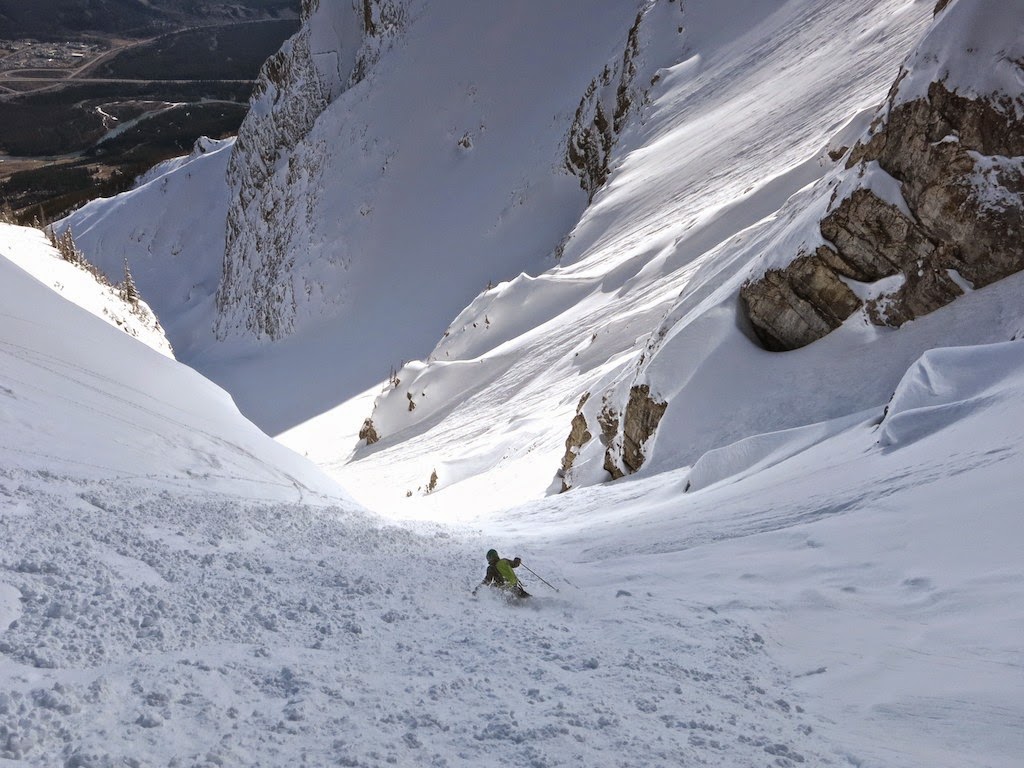 Papa kicked of some surface sluffs, but the debris is still quite skiable. 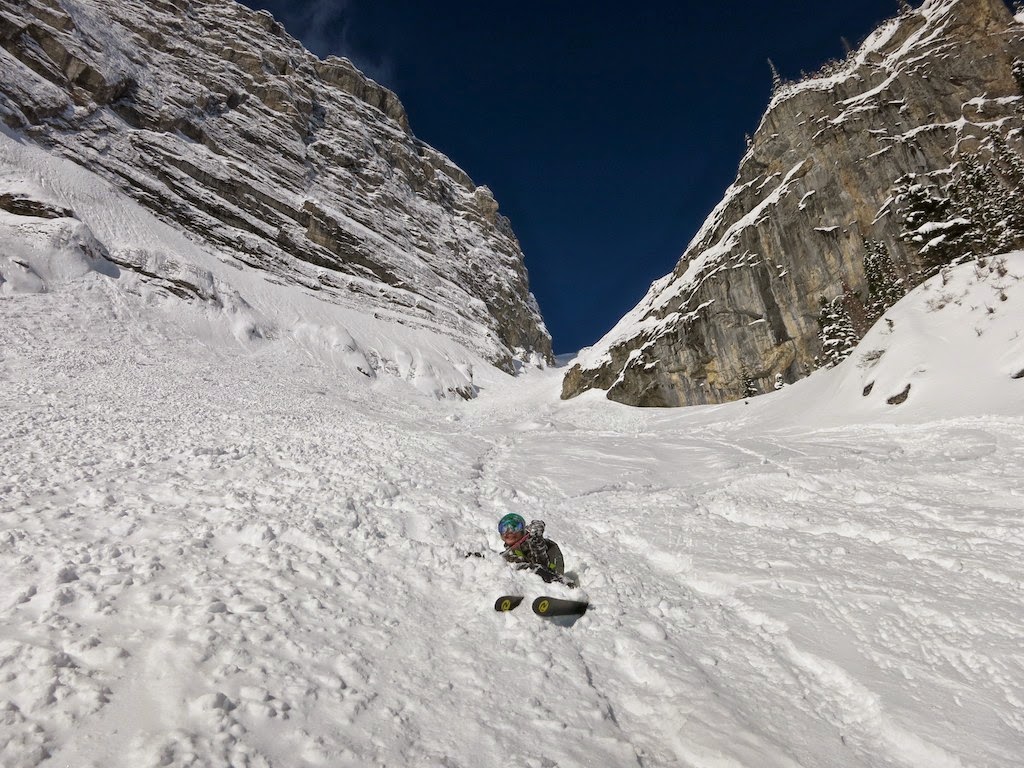 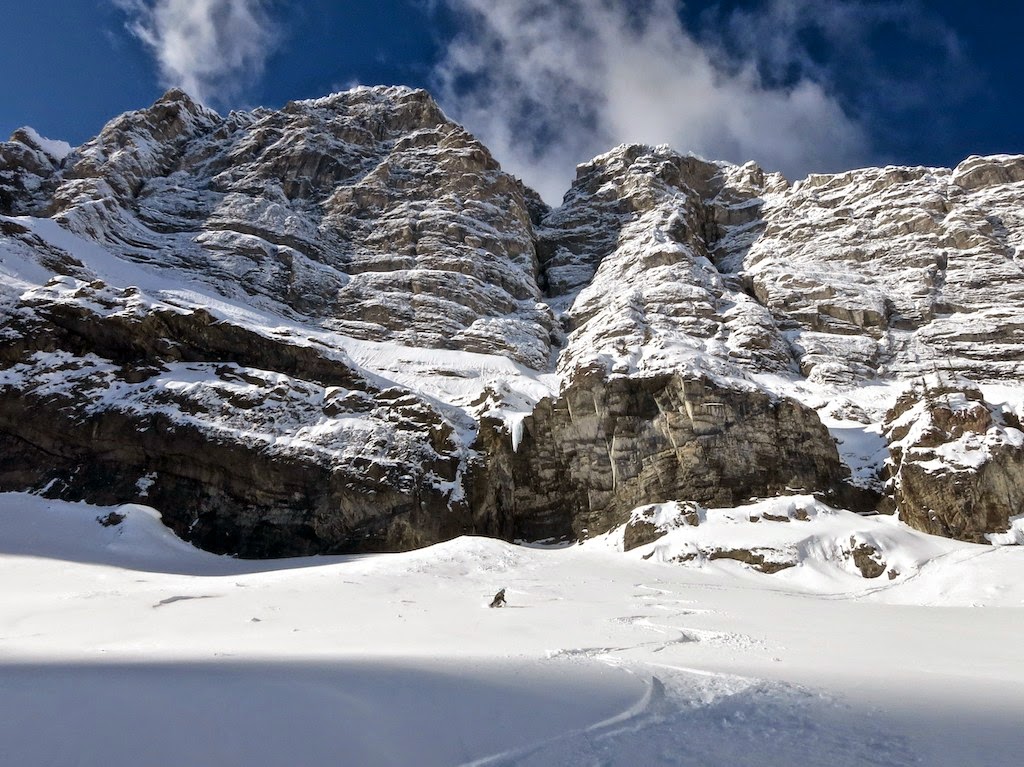 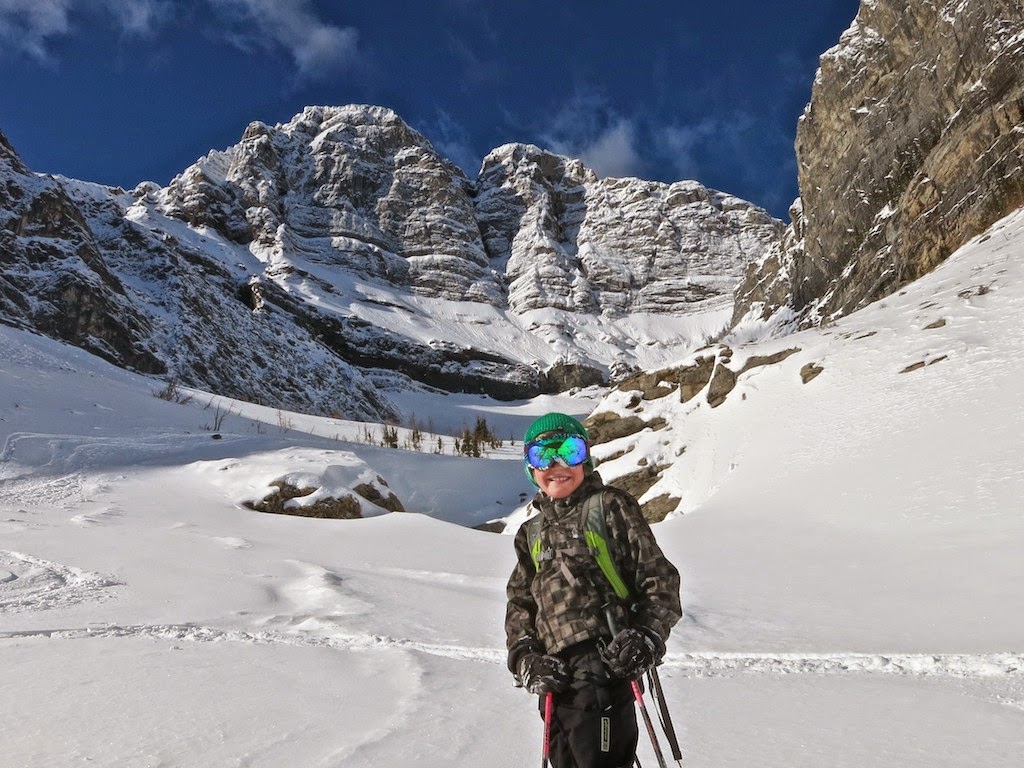 almost done, what an adventure 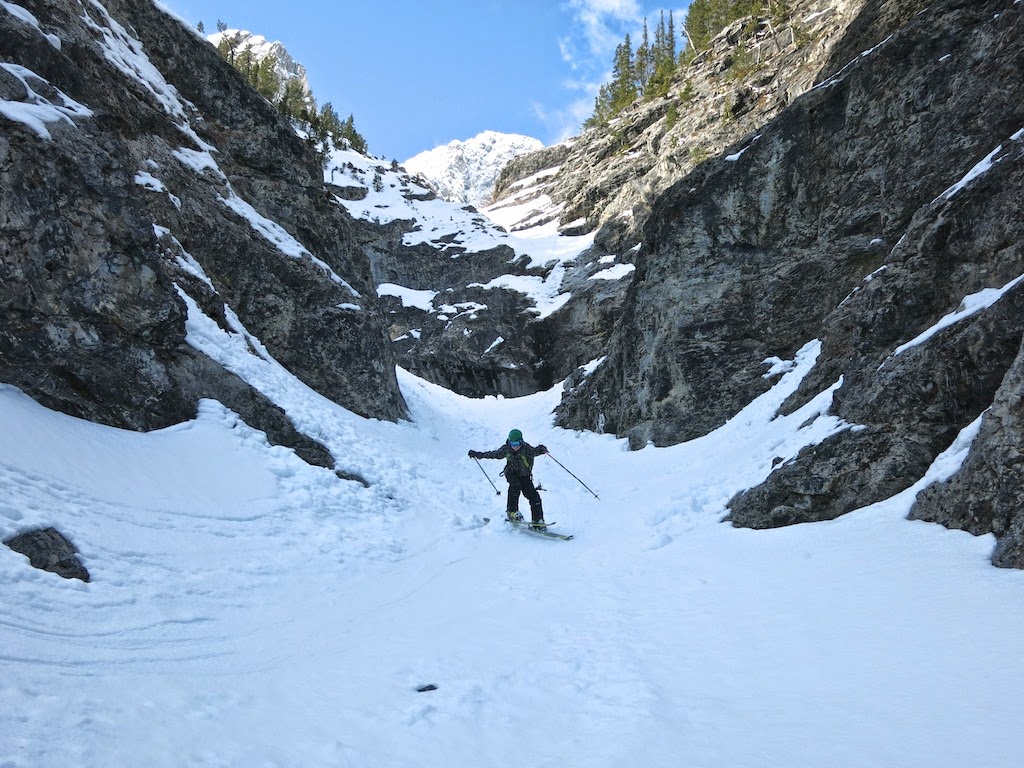 Playing the features around the bottom rock steps and gullies beat any terrain park on the planet.

After a short walk Father and Son reached the road. Instead of calling mum they decided to be environmentally friendly and hitch hike back up to the car, which is parked a few miles up the hill.
Finally, after 40 min and what seemed about a 1000 half empty oversized trucks later, a friendly local stopped and offered them a ride. The nice man did not have any space in his vehicle for the skies though, so F and S just left them at the side of the road in order to pick them up on their way down 20min later.
Well guess what, their entire equipment was gone by the time they returned.
So much for their other ski adventures they already thought out during the long wait on the dusty gravel road.
Happy Easter to all the rest of you who don't steal the wings to our dreams. And please stop the next time you see anybody hitch hiking with ski boots and a pair of skis, they are usually good, tired people who mean well, just returning from another soul filling adventure.

It's raining today in the Adamants, all the way up to tree line. Our first "down day" of the season and I finally find the time to post something in a while.
The last few months were very busy and filled with predominantly ski guiding in British Columbia and the a bit in the Rockies. The difference for me to the last two Winters was a rather unplanned, almost full time return to CMH. I worked 10 weeks in the wonderful mountains of the Adamant Range at the northern part of the Selkirks as a heli ski guide, alongside a crew of wonderful guides and staff. Besides that I had great trips to Sorcerer Lodge and Campell Icefield Chalet, ski touring in remote back country locations. Some day trips around Revelstoke and Lake Louise rounded up the season nicely. That only left room for a few days of ice climbing work this season, but it will hopefully change for next Winter. The busy schedule also did not leave a lot of time for my family, but at least I got to spend one week of school break with them at the end of February. Now I have a week of heli skiing left and then I want to make up for lost time with them in the spring, I am sooo looking forward to it.
It has been a long Winter with lot's of awesome days in the powder with good people, but now I slowly feel the urge behind my fingernails of touching rock again. I am super out of shape for it but I hope the psyche and motivation will make up for the lack of fitness.
I trust everyone out there had a good Winter too and wish you all great outings in the spring.