As it turned out, the ice/alpine line we were hoping to climb was unformed. We both figured it was good thing, given the objective hazards surrounding the climb. On our drive back on the Icefields Parkway we both saw simultaneously what we really wanted to do. Although ill equipped for steep couloir skiing we decided to go for it first light the next morning, spending the night at Mosquito Creek Hostel. 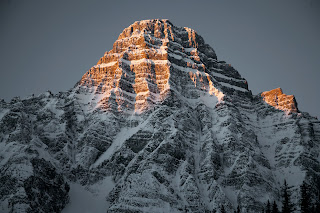 A beautiful sunrise on Mt. Chephren did little to warm us up crossing the Waterfowl and Chephren lakes at -23. We tried to compensate the lack of Coffee in the Hostel with a Green Tea overdose, which only resulted in a non scheduled but very urgent poop stop at this frigid temps. Our goal for the day lies just below and left of the sunlight NE face, two obvious couloirs -the longer right one hidden in this picture- which both top out along the stunning NE Buttress. 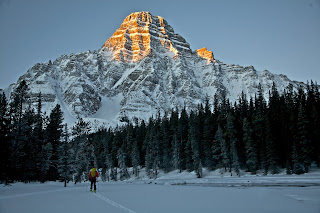 Out of about 100 pictures I took that day of Steve H., this is the only one where his face looks decent. I have to admit, I cheated a bit and used the brand new "make the ugliest face look good - tool" in the latest version of Adobe photo shop. 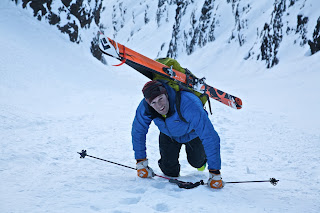 Surrounded by big real estate in the first couloir, which was the longer and more serious one. In the beginning we found ourselves constantly looking up checking for any signs of falling cornices, snow mushrooms or major spin drifts, but after a while our necks got so stiff that we had to give up. It felt like belaying someone for hours on a way too hard of a project, and I wished I would have brought my belay glasses. Luckily the mountain was calm and nothing significant came upon us. 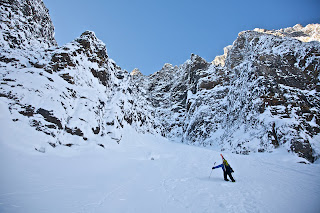 The 'choke' half way up the first line, certainly the crux on the ski down. After my previously mentioned attempts I politely asked Steve to keep his face hidden from the camera, so it saved me the time consuming touch up work at home. Thanks Steve, you're a real team player. 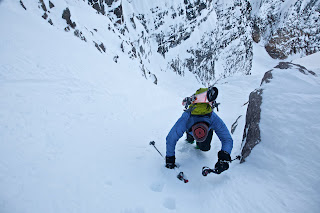 Steve on the aesthetic top out on the left hand couloir, our tracks from the first run visible in the bottom left hand corner. 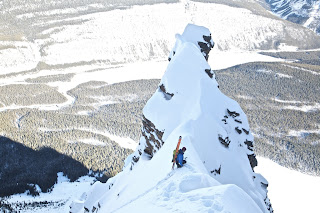 The nice fluff in the upper part motivates Steve to attack like a young gun. I like skiing lines like that with Steve in particular, since he can't get lost in there like on regular ski outings. 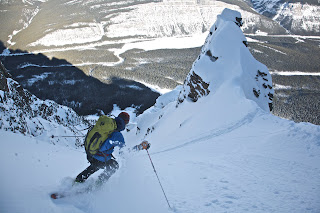 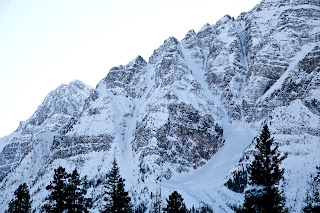 The rock pillar in the center splits the two lines of the day. Since they are dwarfed by the immense NE face of Mt. Chephren, one might not assume that they are 1000m for the right and 900m for the left hand one, measured from Waterfowl lake.
Although such obvious lines for sure got skied a bunch before us, we took the freedom to name the right one "Kum ba jah couloir", after our first hostel experience with good folks the night before in Mosquito creek.
Posted by gery unterasinger at 11:35 AM